Reconstruction of the tomb n. 189 found in Blucina (Southern Moravia)

The grave contains a bronze bracelet, a digital ring, a ring probably for a belt, fragments of 5 bronze and iron fibulae, a bronze pendant, a round and an amphora-shaped bead (both in glass) and a whetstone. The tomb is dated LT B1. If the glass decorations attested to the influence of the southeastern areas of Europe, even of the Adriatic area, the sword-shaped bronze pendant, quite unique in Moravia, has its origins in the Lake Como area, with which Moravia undoubtedly came into contact thanks to the migration of the Celts in that period.
The very large number of fibulae raise some doubts about the plausible reconstruction of the jewels as the deceased could have worn them all together, or used two for the dress and two for the cape. As last hypothesis, it may have simply been buried with her favorite jewels. In the photo, 4 fibulae were worn for pure visual purpose, but only 2 will be chosen to close the mint green linen dress, reconstructed on the bases of the Greek peplos and the clothes found in “barbarian” territory, first of all the one from Huldremose which, although not contemporary, is one of the few concrete testimonies of woman’s dresses. The dress is decorated with a patterned wool trimmings. Under the peplo, our re-enactor wears a woven wool tunic with a checkered weave down to the waist. For simplicity, the pendant and the beads were inserted in the same leather lace to form a single necklace. The massive bronze ring was plausibly used to close a leather belt. The whetstone has a hole in the upper part so we assumed that it could be carried hanging on a belt. Completing the whole, a wool belt made by tablet weaving and a pair of Hallstatt shoes. 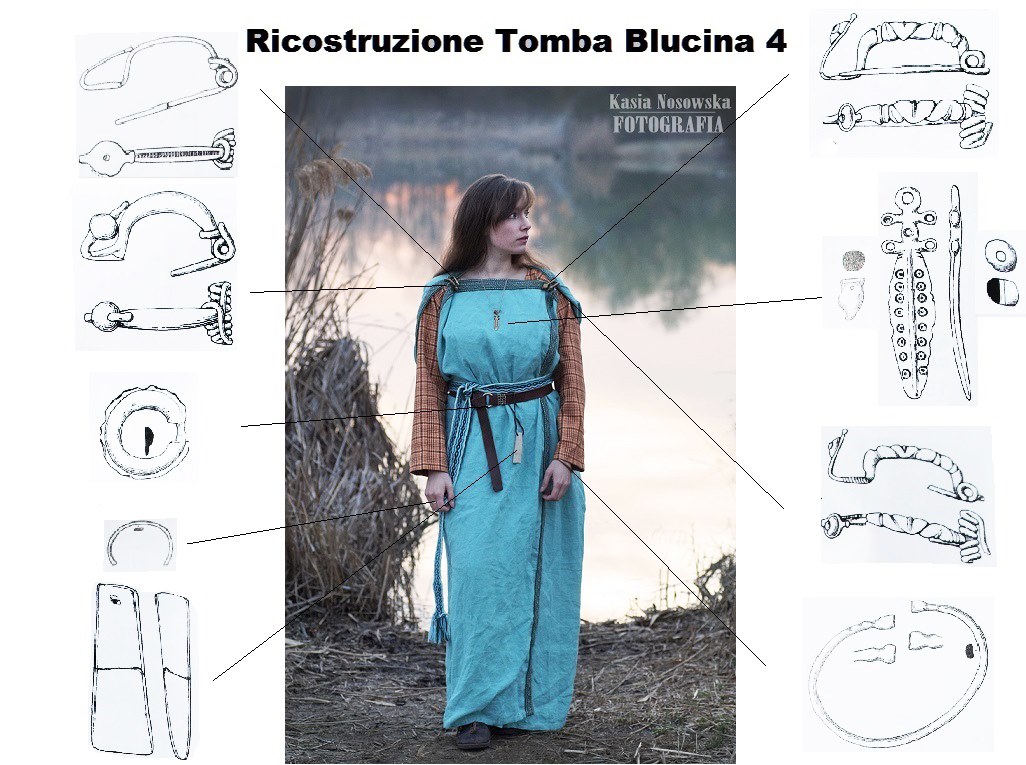